The new franchise owner is no stranger to the business. He used to be a manufacturer of a brick paver sealant - than ventured away from his business partner, sold his share of ownership, to open his own brick paver cleaning and sealing company. After a few years, he realized the best way to be on the level of his largest competitor, Dura Guard Paver SealingLLC, was to join them! Were glad to take him on board so he can run his own Dura Guard branch!

No other company has the man power to handle the large paver sealing, travertine sealing and concrete sealing projects that we are able to take on while offering a short time frame for completed projects, and we still service the tiny brick paver walkways & driveways or brick paver patios and pool decks found at your home.

Www.DuraGuardFL.com 727-218-4221 (We are not actively servicing these areas as of this moment until all licensing requirements are fulfilled with the PCCLB - but be on the lookout for us soon!)

Should you have brick pavers sealed right after installation?

The importance of paver joint sand. Should you re-sand brick paver joints? 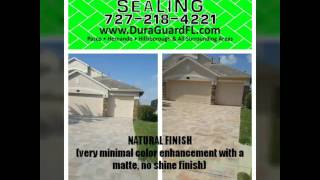 Should you seal your concrete?